Most of us heavily relied on a basic notepad or a simple text editor to write and edit HTML and CSS code at the start of our web development career. However, as we moved onto complicated and sophisticated projects, we realised that we will need access to advanced web development tools. This is why several developers have switched to an IDE instead of a text or code editor.

Integrated Development Environment or IDE is a software development tool designed to encompass all programming tasks without relying on any other application. Developers have to use numerous tools like code libraries, text editors, test platforms, and compilers when working on a web development project. What an IDE does is that it provides everything under a single application.

Difference Between Text Editors and IDE

A web development IDE does everything a simple text editor does, but they can also be used for plenty of advanced processes like testing, automating, and more. Most web development IDEs usually contain a debugger, compiler, code editor, and test platforms. An IDE, which is an integrated toolset, simplifies the process of web development.

In this article, we have rounded some of the best IDE for web development. We have also given a brief insight into each one of the IDEs to help you make an informed decision when selecting an IDE.

Visual Studio Code is an open-source and cross-platform editor that works on macOS, Linux, and Windows. The platform supports almost all programming languages that include HTML, JavaScript, CSS, C++, Python, and Java. An in-built debugger is included within VSC to help developers with debugging.

Visual Studio Code is often confused with Visual Studio, which is an entirely different product.  The former is a source code editor while the latter is an IDE. Moreover, Visual Studio works only across macOS and Windows whereas VSC works on Linux too. Finally, Visual Studio is generally used for .NET, but VSC is used to write numerous programming languages. 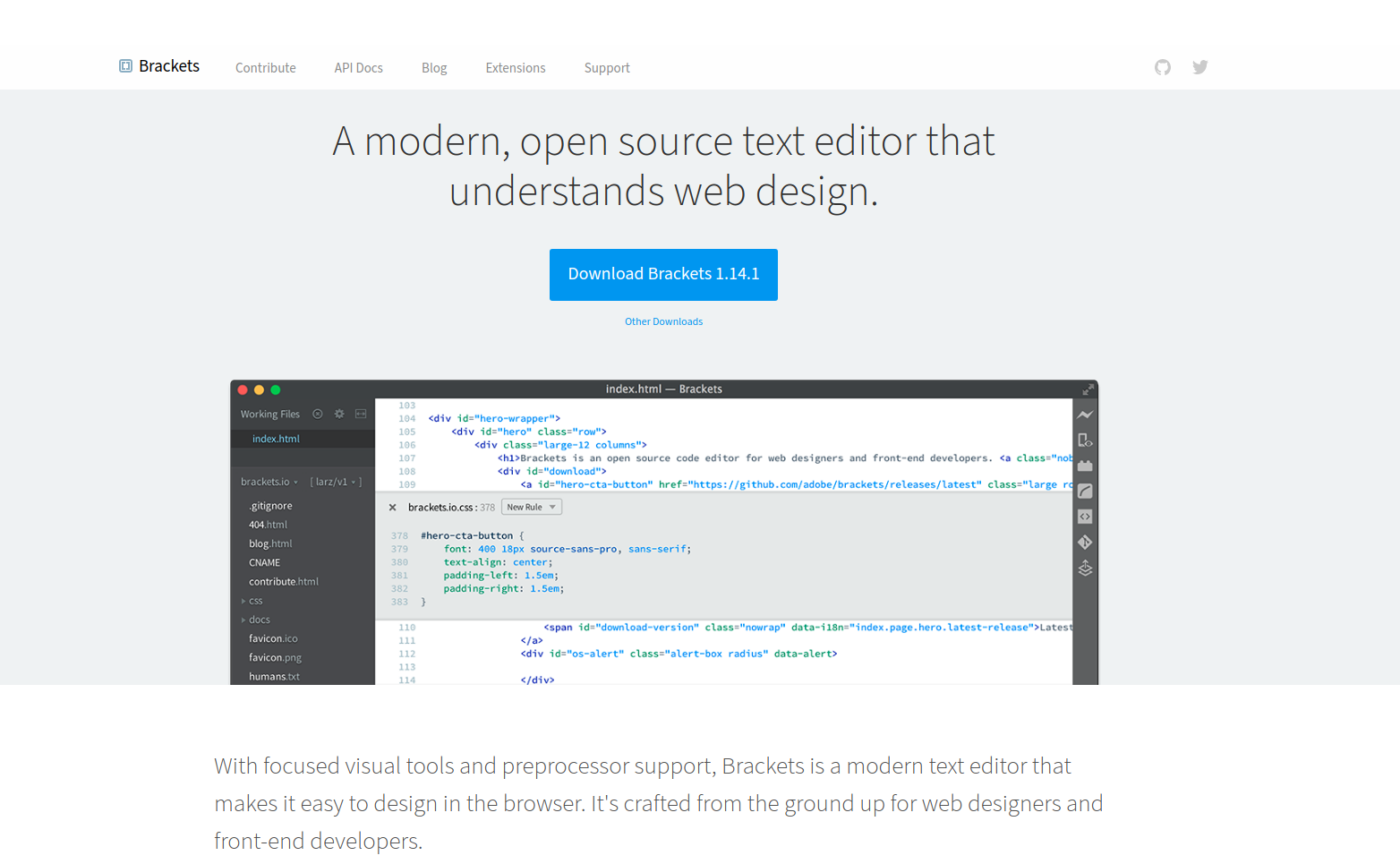 Brackets is an open-source editor that is ideal for coding everything and it was originally developed by Adobe. The editor is a simple and lightweight but powerful IDE that offers multiple visual tools like inline editor and split view.

It also features a user-friendly interface and simple navigation that will allow developers to easily make necessary changes to their code.

Two remarkable features of the editor are Code Hints and Live Preview. Code Hints can be used to extract information from PSD files, as it integrated with Photoshop, another Adobe product. On the other hand, Live Preview helps developers view HTML and CSS changes instantly. You can also easily identify where exactly the changes are being made. Brackets was specifically designed for front-end developers and designers. 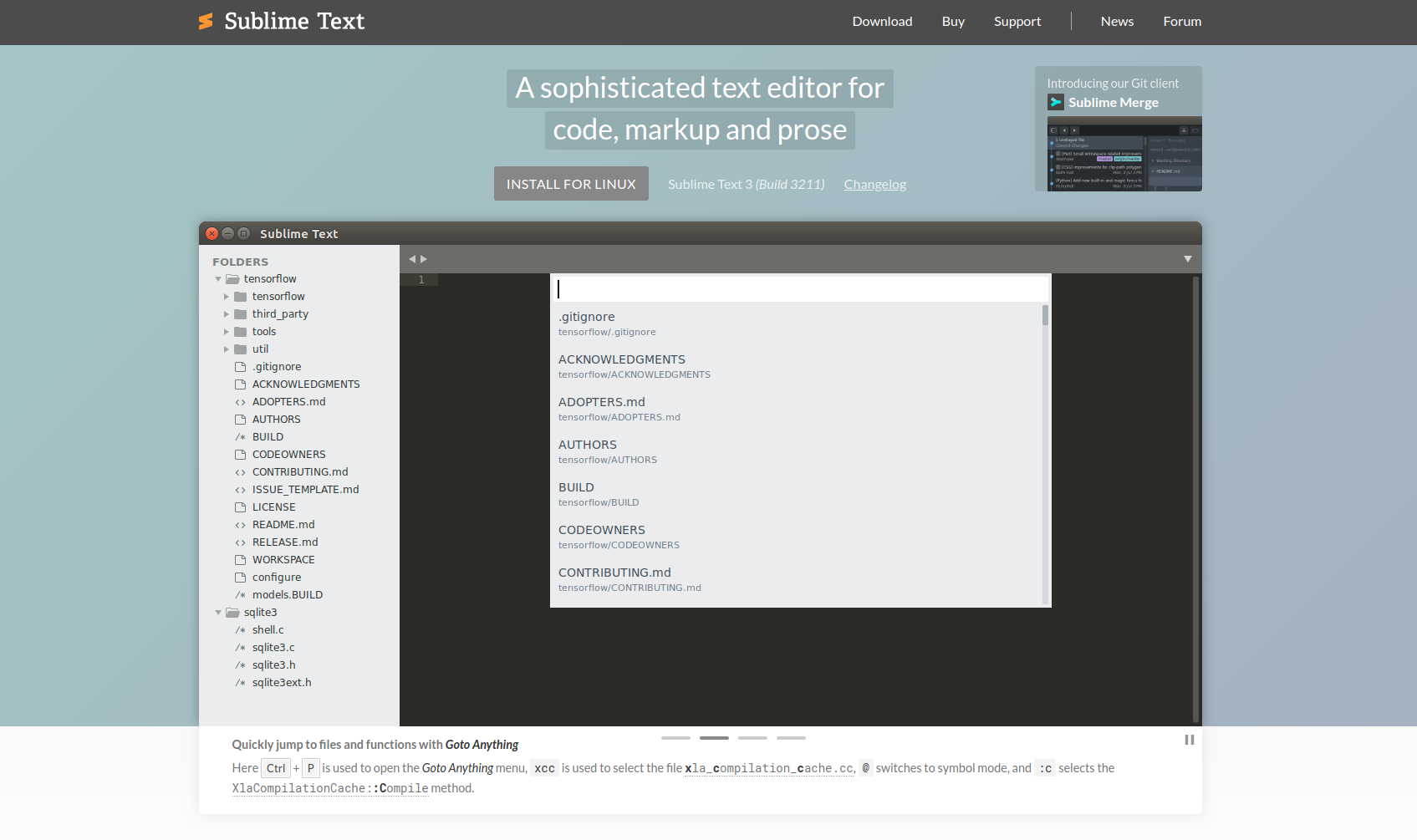 Sublime Text 3 is a super fast and solid code editor and is currently available on Linux, Mac, and Windows. Developers will be able to configure Sublime Text 3 as a fully-featured IDE with advanced features that includes autocompletion. It supports JavaScript, CSS, HTML, Python, PHP, and other programming languages. Developers can expand the functionalities of the editor by adding plugins. Sublime Text is actually a paid editor, but you can use the free version as long as you please.

Sublime guarantees a high-performance speed even working multiple packages or files. Sublime is focussed on helping users to get things done quickly and it has features that can help you do just that. For example, the Goto Anything feature lets users open files and jump to symbols, words, or lines quickly. The Multiple Selection feature can be used to make changes to multiple lines of code at the same time. 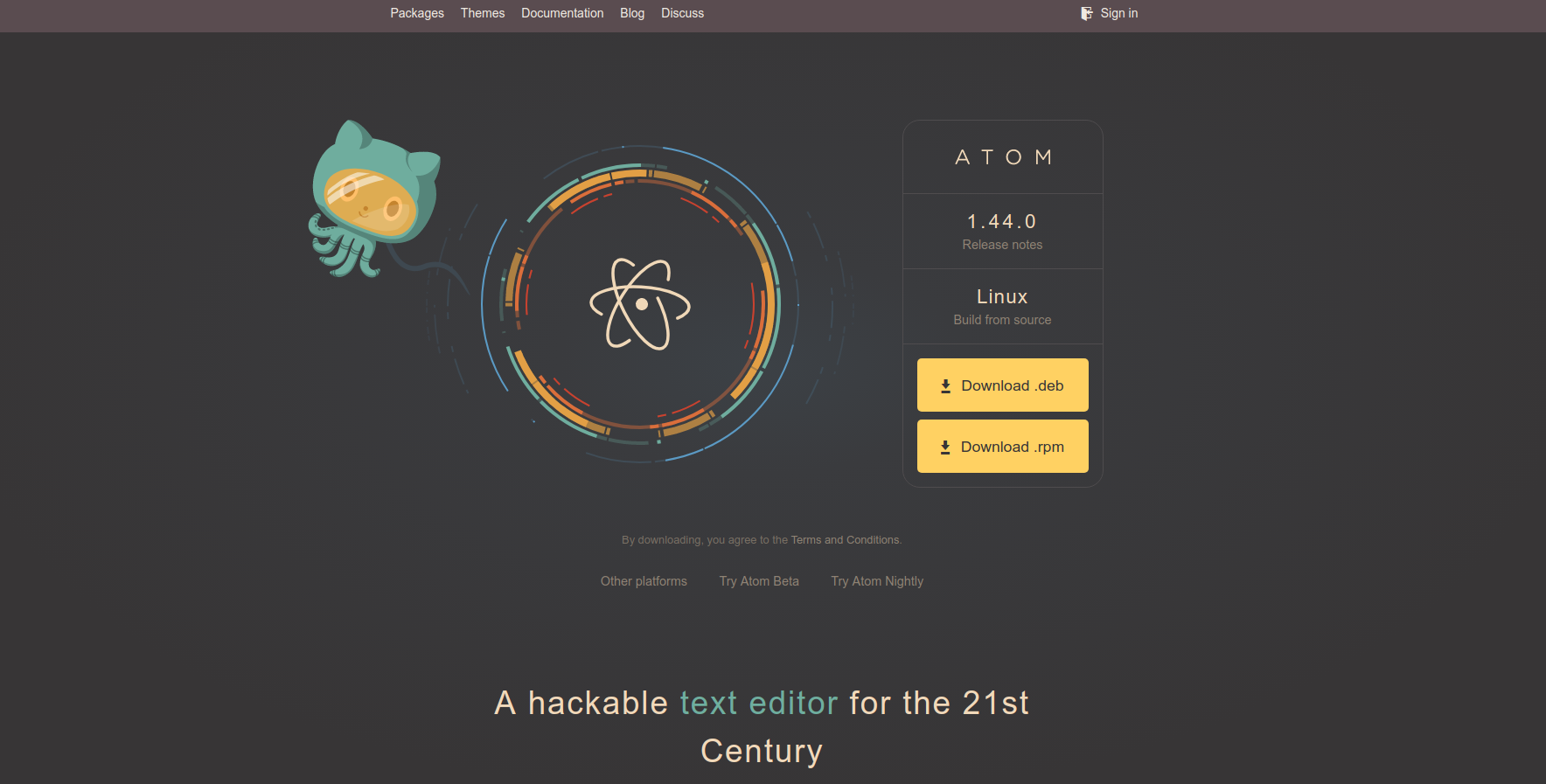 Atom, which is created by Github, is one of the best editors for JavaScript. Atom comes with a built-in package manager, which allows you to quickly and easily kickstart new projects. This tool also allows developers to install new packaged without any hassles. Four UI and 8 syntax themes in a wide range of colors are included within Atom by default.

The editors also work exceptionally well across Windows, Linux, OS X, and operating systems. Atom comes with an in-built package manager, which will help you with customizations. The packages available on Github are very well-documented with animations and screenshots. The Teletype of Atom is also impressive and it allows developers to collaborate with others by sharing their workspace. 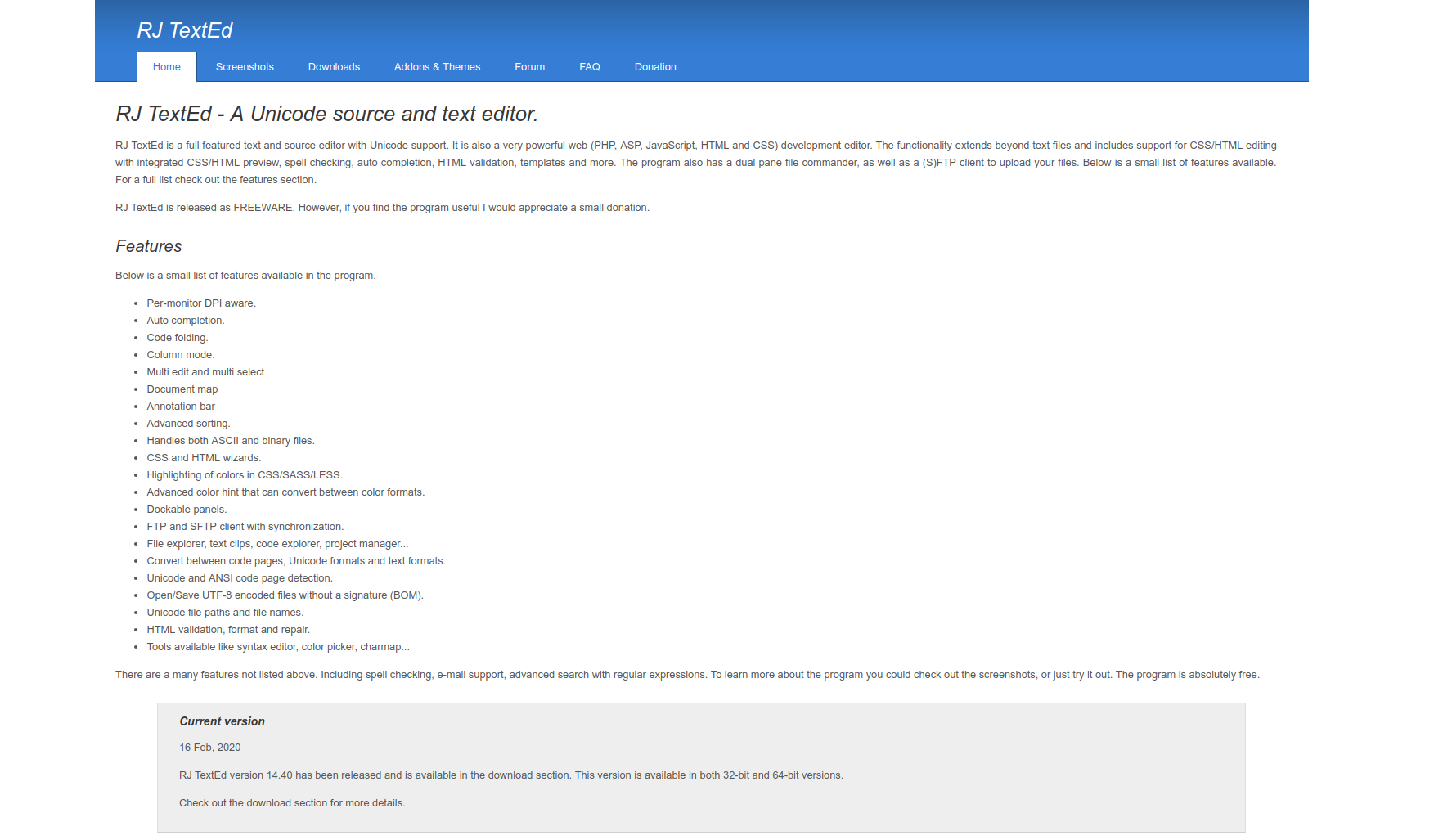 RJ TextEd is an excellent text and source editor that is fully compatible with ASP, PHP, CSS, HTML, and JavaScript. It is equipped with a dual pane commander which gives quick and easy access to the application’s main features.  The editor has plenty of excellent features that includes Code Folding, Auto Completion, and Advanced Sorting.

RJ TextEd is also capable of handling both binary and ASCII files. The editor also has multiple text editing modes like column mode, multi-edit, and multi-select. RJ TextEd is the best option for developers who are on the lookout for a comprehensive source editor with an easy to navigate interface.

Komodo Edit is an excellent text editor for CSS3 and HTML5 programing. The editor comes with plenty of features that includes Code Refactoring, Symbol Browser, Code Browser, and more. You can also find powerful graphical debugging tools within the same editor. It has a customizable UI with split view and multi-window editing features.

The general architecture of the editor is very similar to that of Firefox internet browser. You can easily extend the functionalities of Komodo by adding new add-ons. Komodo Edit guarantees a fine and consistent performance across Windows, Linux, and mac. 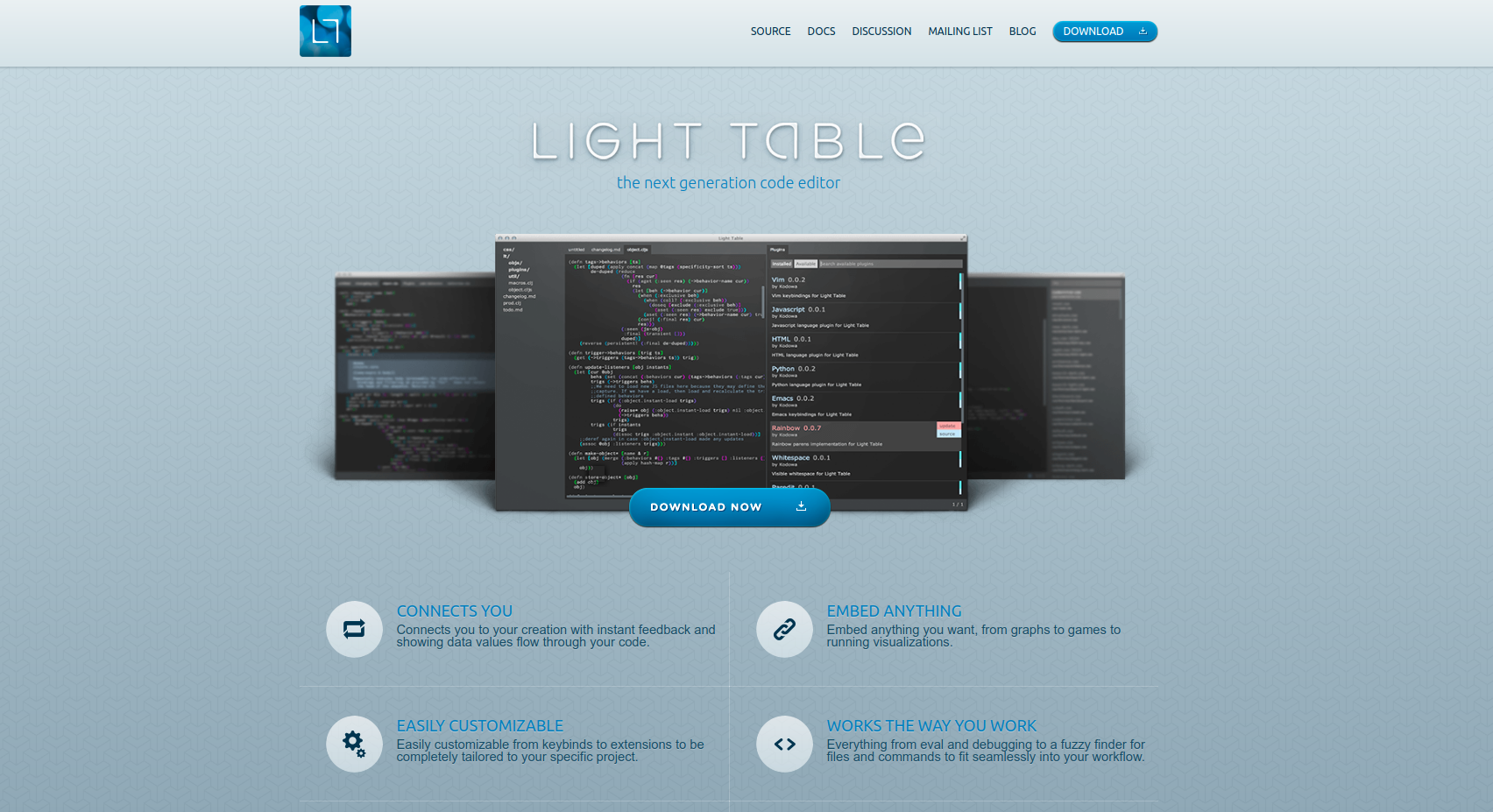 Light Table is a unique and innovative web development IDE. The creators of this IDE solely believe that developers require a real work surface to write and edit code instead of an editor.  Light Table also offers users the chance to collaborate with other Light Table users.

That is what they have designed through the reacting work surface, Light Table exclusively used for the exploration and creation of programs or apps. You can use Light Table just like any other normal editor. In short, Light Table has a lightweight and smooth interface with advanced features and functions. 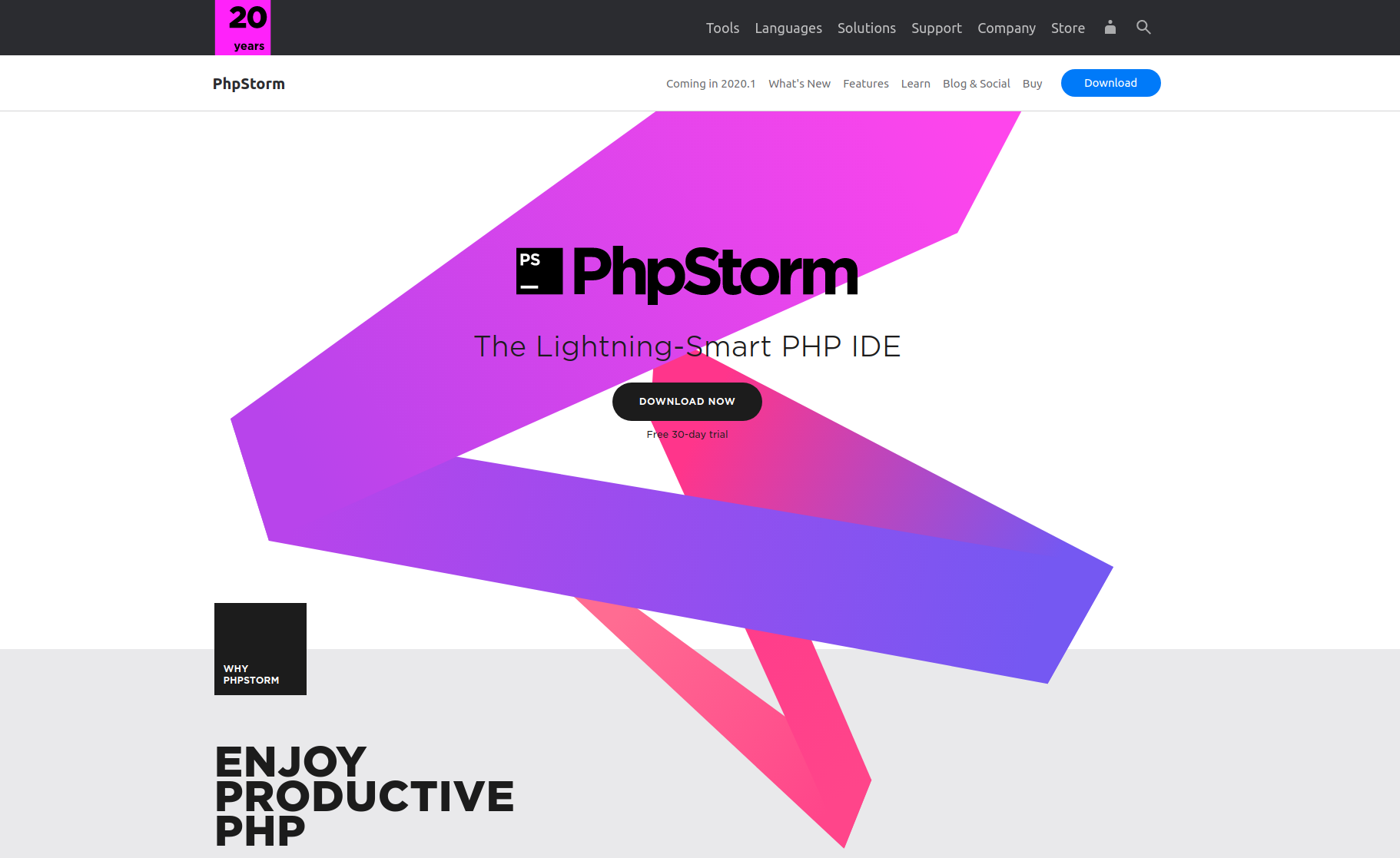 PHPStorm is a reliable and efficient coding assistant featuring a wide range of advanced features. It is specifically designed to help developers to simplify the process of building large applications and professional platforms. It has a JavaScript editor and live edit functionality which allows developers to instantly view the changes.

PHPStorm comes with a built-in version control integration, SQL databasement management features, command-line tools, and more advanced features. One of the stand out features of the PHPStorm is its secure refactoring functionality. This feature makes it possible for developers to refactor codes. 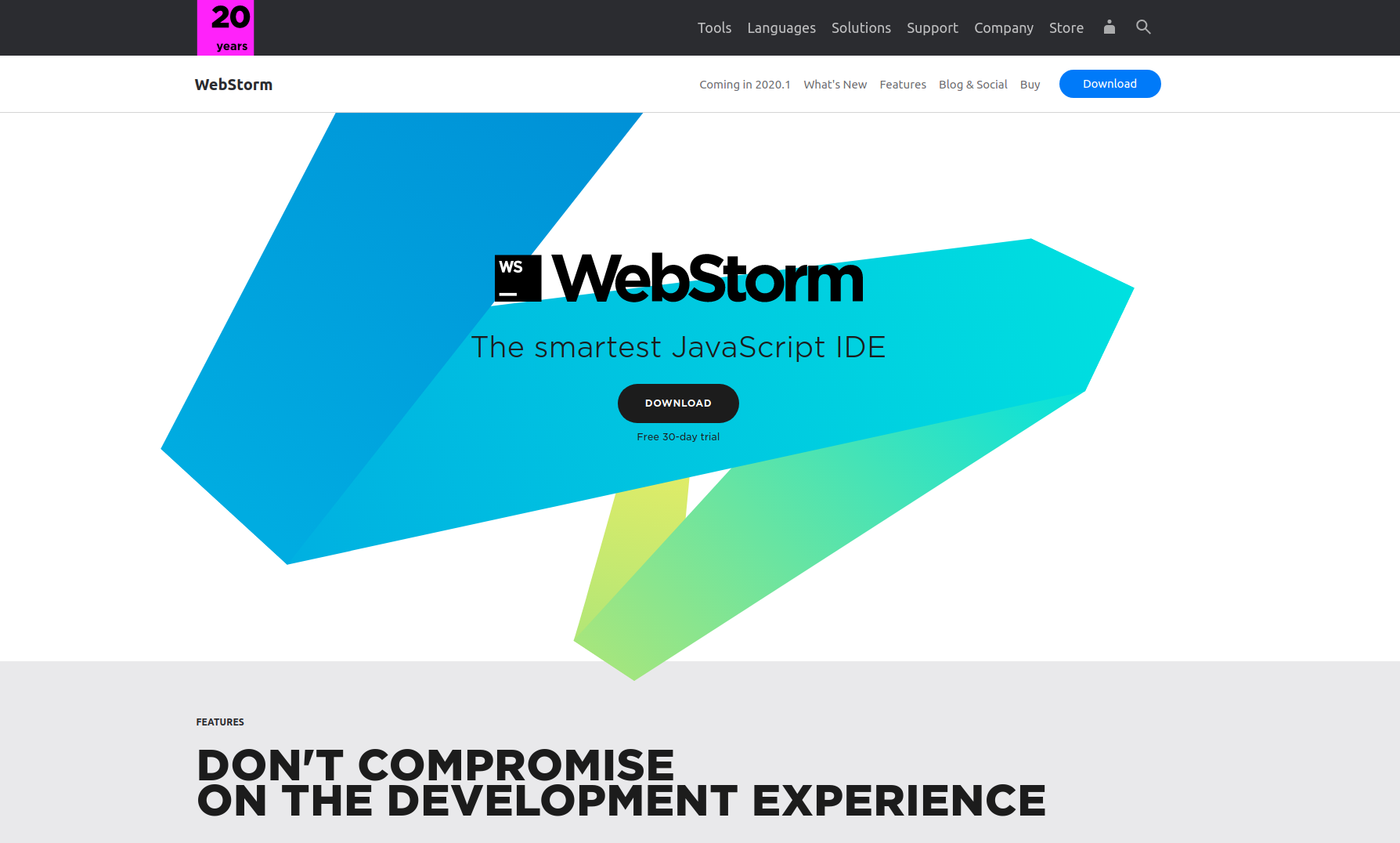 WebStorm is actually a lot similar to the above-mentioned IDE, PHPStorm. But, what makes the former different is that it does not support PHP. So, if you are not planning to use PHP or if you are on a tight budget, it is best to choose WebStorm over PHPStorm.

The editor is equipped with a powerful refactoring tool for JavaScript and other stylesheet language. In addition, it also contains an in-built debugger to help developers when they are building complex web applications.

The process of web development gets easier and more efficient when you have access to the right tools. A quick Google search on the best IDE for web development will bring a wide variety of suggestions. So, you may feel confused and overwhelmed, but you will still be able to make a smart decision if you focus on your project requirements.

If you are a beginner, it would be wise to choose Visual Studio Code or Brackets. Brackets have a simple and uncomplicated UI while Visual Studio Code is an excellent learning tool. The editor explains everything from simple HTML tag to error handling to help beginners.

However, Visual Studio Code is also suitable for complex and serious projects thanks to its advanced features. Similarly, Sublime Text 3 is also highly recommended when working on complex web app development projects.