Bootstrap has always been our personal favourite CSS framework for creating powerful websites. With its unmatched popularity, fanbase and support, we've seldom had reason to switch to other frameworks. That said, there are plenty of frameworks out there that can be used for web design and development projects.

If you are a new developer, then you might find it a little bit difficult to identify the right framework for your project. Foundation and Bootstrap are undoubtedly the most popular framework choices of most developers. However, in some cases, you might need to use these two frameworks, especially when you are building a simple or basic website. So, take a quick glimpse at some of the best Bootstrap alternatives that may be suitable for your project.

Foundation is described as “a Framework for any device, medium, and accessibility” on their official website. The group of highly responsive frameworks that make up Foundation can be used to build stunning applications and websites that look great when viewed from different types of devices. Today, millions of developers and designers from all over the globe heavily relies on the Foundation framework.

In fact, a number of internationally renowned organizations like eBay, HP, Amazon, and Adobe incorporate the use of this framework. The responsive grid, handy UI elements, and other excellent features of Foundation makes it the best Bootstrap framework alternative.

Cardinal is another excellent choice available for developers who are in search of a Bootstrap alternative. This mobile-first and modular framework were built by developers by putting extra focus on maintainability, readability, and performance. The launch of the Cardinal framework has made it very easy for developers to scale, maintain, or build CSS for apps, user interfaces, and responsive websites.

One of the fascinating aspects of this framework is that it has purposefully removed several aesthetic design choices, which may bog down the framework. This, in turn, offers more control to developers when they are working on a web design or development project. 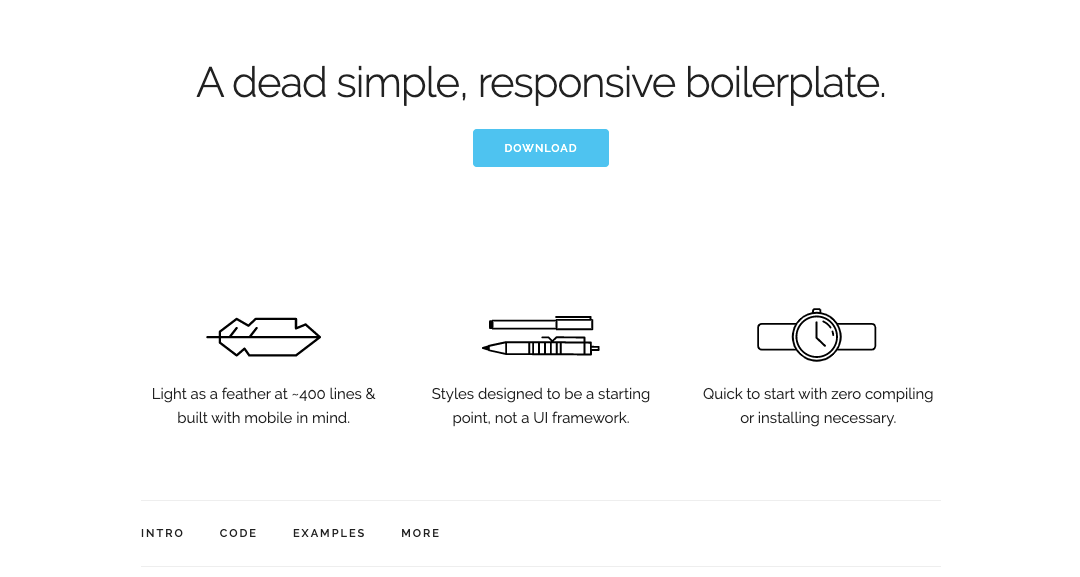 What makes Skeleton framework different from Bootstrap and Foundation is that it is a lightweight framework. The recently updated grid system of this framework has started to adopt the innovative mobile-first practice, which means that your website will look good on devices with different screen sizes. Skeleton is defined as a dead-simple and responsive boilerplate on their official website.

If you are looking for a Bootstrap framework alternative that saves you the trouble of going through plenty of framework utilities while designing a website, then you will instantly fall in love with Skeleton. Several fundamental components like tables, lists, buttons, and forms are included in the Skeleton framework.

The Bootstrap alternative, Pure is actually a free CSS framework that contains a group of CSS modules that are clustered together. In their official website, Pure framework is defined as ‘a set of small responsive CSS modules” that can be used for different types of websites. The size of the entire framework is estimated to be around 3.8 kb, which is relatively less when compared to other frameworks.

One of the best things about the Pure framework is that it enables website designers and developers to create highly responsive website layouts with the help of forms, menus, grids, buttons, and more. Another important thing to note is that Pure framework comes with the minimum number of styles.

In simple words, Mueller can be defined as an excellent Bootstrap framework that is built upon Compass and SASS. In the official website of Mueller, it is described as a modular grid system for responsive/adaptive and non–responsive layouts. If you are using this framework, then you will gain entire control on media-queries, baseline grid, and column width.

If you are looking to create highly responsive and easily adaptive layouts, then you will surely be impressed with the Mueller framework because it enables you to do so with ease. Mueller framework also helps developers to ensure that the HTML elements are clean and neat.

Web designers and developers who are in search of a mobile-first framework that comes with several handy features and other tools do not have to look further because Furtive framework has got you covered. It might come as a surprise to many readers when they hear the fact that the Bootflat template is built with the Bootstrap 3 framework.

If you are using the Bootflat framework, then you will be easily able to create stunning websites and apps without any hassles. Another interesting point you need to note is that this excellent framework has multiple numbers of built-in color schemes that will surely come in handy when it comes to website customization.

The modular front-end framework, UIKit is extremely lightweight yet it can still be used to built highly responsive web interfaces with ease. One of the fascinating aspects of the UIKit framework is that it is equipped with a Pro version, which offers greater number of developmental possibilities to users.

What makes UIKit unique or different from other types of websites is that the theme and page builder in this framework can be used for both WordPress and Joomla. Developers who are using the UIKit platform for their web design and development projects will be able to customize almost all parts of the framework as per their personal preferences.

The front-end framework of Materialize was designed on the basis of the material design principles that were set by Google itself. If you are looking for a Bootstrap framework alternative that is capable of integrating traditional web design and development methods with the new trends and innovations, then you should consider settling for the Materialize framework.

This framework is the ideal choice for beginners, as it eliminates the need to write tons of complicated codes while working on web design projects. Apart from that, the animations in your website will stay smooth when you are using this framework, which in turn ensures a fine user experience.

Lorem Ipsum is simply dummy text of the printing and typesetting industry. Lorem Ipsum has been the industry's standard dummy text ever since the 1500s, when an unknown printer took a galley of type and scrambled it to make a type specimen book. It has survived not only five centuries, but also the leap into electronic typesetting, remaining essentially unchanged. It was popularised in the 1960s with the release of Letraset sheets containing Lorem Ipsum passages, and more recently with desktop publishing
Necessary Always Enabled

Any cookies that may not be particularly necessary for the website to function and is used specifically to collect user personal data via analytics, ads, other embedded contents are termed as non-necessary cookies. It is mandatory to procure user consent prior to running these cookies on your website.